Spanish police: “Spain most important producer of marijuana in Europe”

One in five young people admit that they regularly smoke marijuana. 28% of the population admits having ever tried it. 10% are hooked. Consumption of this substance already exceeds that of hashish. But there is an even more devastating fact: in the police operations carried out in Malaga, more drugs produced in Spain (marijuana) are intervened than imported from Morocco (hashish) or South America (cocaine), according to the Prosecutor’s Office.

Southern Spain, with Granada and Malaga at the helm, has become the main growing region for cannabis sativa on the continent. The Greenhouse of Europe. “We are, in marijuana, what Morocco hashish is,” says an anti-drug agent. “Spain is the main producer of marijuana in Europe, it is true, although not at the level of Morocco,” says another specialist in organized crime.

The Rif Mountains produce between 35,000 and 38,000 tons a year of hashish, which is 10% of Moroccan Gross Domestic Product (GDP), according to the International Narcotics Control Board. A recent study by the University of Granada maintains that it employs some 750,000 peasants. It is the world’s leading producer and it is estimated that 70% of its harvest is destined for Europe.

The cultivation and trafficking of hashish and marijuana follow very different routes. Both come from the female cannabis plant, but the first is the resin obtained from it, while the second is the dried flowers and leaves. The UN Office on Crime and Drugs (UNODC), a leading body in global drug trafficking research, stresses that hashish is exported from one continent to another, but marijuana is not. Morocco and Afghanistan produce cannabis resin for the whole world, while marijuana trafficking “takes place predominantly in the production region,” according to UNODC. In other words, Europe is supplied by local crops, with Spain at the forefront.

At the Center for Intelligence against Terrorism and Organized Crime (CITCO), an agency under the Ministry of the Interior, they are reluctant to place Spain at the level of Morocco, although the data they provide speaks for itself: in 2019, more were seized. 32 tons of marijuana in Spain and 1,300,000 plants, compared to 799,616 the previous year; Half a million more stems in just 12 months, representing an increase of 39%. 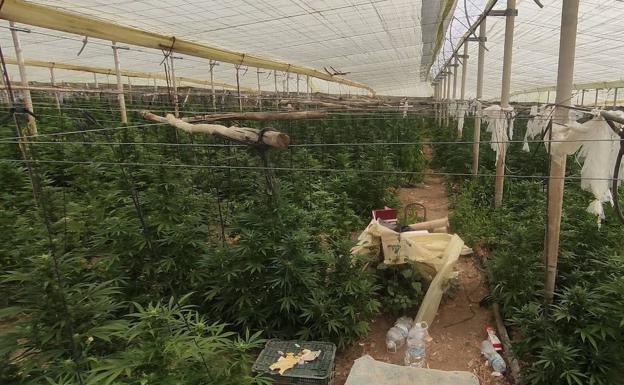 According to the 2018 drug balance, the last report made by Interior, in Andalusia 9,565 kilos of marijuana already processed were intervened, followed, quite a distance, from Catalonia, with 5,331 kilos, which is a producing region, but also a transit area of the narcotic drug to Europe, which explains the level of seizures. To illustrate the progress of the market, you only have to look at the data from 2014, in which 2,800 kilos were seized in Andalusia (the increase in five years is 70%) and 1,100 in Catalonia.

The figures are even more eloquent if the statistics of intervened plants are consulted. Andalusia has gone from 77,297 stems in 2014 to 382,066 in 2018 (the ceiling is in 2017, with 463,815). Catalonia, with 57,256 plants, is not the second producing region, confirming that its level of seizures has more to do with its geographical border location. After Andalusia is the Valencian Community, with 135,000 stems seized in 2018.

Greenhouses in Axarquía
The head of the Narcotics Section of the Udyco-Costa del Sol confirms the role of Spain, and specifically Malaga, as the main European producer of marijuana. In June, the National Police dismantled five greenhouses in Axarquía with 18,000 plants. Days later, the Civil Guard discovered another three with 10,000 more. “The orography of the Axarquía (also of the Guadalhorce and the surroundings of the mountains of Malaga) makes research difficult: small hills, many valleys and lanes, private farms, where tomatoes were planted before … Without a clear suspicion, you cannot enter ».

This is precisely one of the novelties detected in Malaga: traditional agricultural crops that mutate and switch to drug trafficking. According to CITCO, 26% of the seizures of marijuana made in 2019 in Spain were carried out in fields or natural areas. “People are losing respect for him,” says another drug agent.

Although the latifundios are in clear expansion, the usual production system is the ‘indoor’ one, that is, within homes (46%, according to CITCO data). “It is the most profitable because it is the most difficult to discover and can give you up to 5 and 6 harvests a year,” explains the head of Narcotic Drugs at Udyco Malaga. They go from a hundred floors in small apartments (more common in Malaga) to 1,500 or 2,000 in the basements of large villas (in urbanizations on the coast).

The genesis of this production system places the anti-drug agent in the 2008 crisis. The evictions and bankruptcy of construction companies, which left half-finished housing promotions, provided organizations with the ‘stock’ of houses necessary to plant marijuana. The climate, the orography and the infrastructure did the rest. 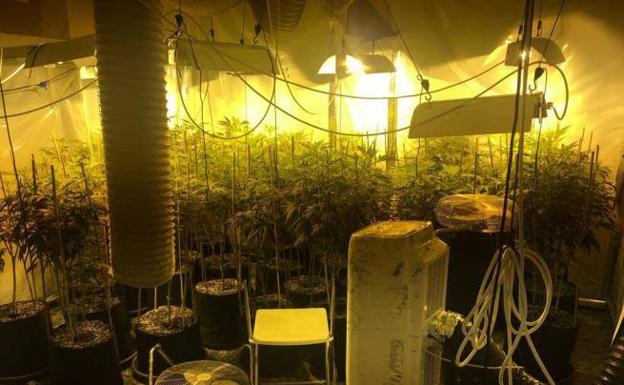 When the country began to emerge from the recession, the large international groups, mainly the British and the Dutch, chose to rent houses (they come to pay the three annuities of the contract in advance) to install the nurseries. Although the business is a millionaire, they do not usually invest in buying these properties because they are obliged to move to avoid police action.

Second residence squats
The coronavirus crisis has also provided an opportunity. The confinement prevented the movement of citizens to their second homes on the Coast. Groups of indigenous drug traffickers soon found these homes and have ‘squatted’ them to install marijuana plantations. “They are looking for families with financial difficulties and offer them the house with keys, electricity and water,” says the Udyco chief inspector, who has already registered a dozen cases of this type in the province. The ‘squatter’ family may or may not participate in the business – if they are involved, they may also receive a salary – although the drug traffickers are better off staying in the home, since it constitutes a dwelling and prevents police intervention by their presence alone. , which requires judicial authorization.

Another growing modality is cultivation in industrial warehouses and warehouses (5% of the intervened plantations, according to CITCO). At Udyco, several bands of Chinese origin that use these facilities have already been dismantled. “A few years ago, only small groups without any type of structure were detected, but now true networks dedicated to marijuana are appearing and consolidating,” they clarify at the Center for Intelligence against Terrorism and Organized Crime. Organized Spanish and international groups have been detected in Malaga, while in Granada control remains in the hands of indigenous clans.

Conditioning the property or warehouse requires an initial outlay that can range from 60,000 to 100,000 euros, even more, depending on size. A trifle for the dimensions of the business. From a small 100-meter-high nursery one meter high, drug traffickers can remove about 100 kilos of ‘green’, from which, once processed, they obtain about 40 of marijuana. At 1,700 euros per kilo (current price in Spain), the investment is amortized in the first harvest.

Energy expenditure
The ‘indoor’ plantations require a high energy expenditure (lamps to speed up production cycles and increase harvests, extractors to avoid odors …), so they try to make illegal connections to public lighting or to the community. So much so that the electricity companies already have teams of engineers and technicians dedicated exclusively to prosecuting fraud, who work closely with the State Security Forces and Bodies.

Although the settling of accounts has traditionally been associated with cocaine, both CITCO and Udyco Malaga recognize that there is beginning to be violence around marijuana in Spain. ‘Rollovers’ (thefts between organizations) and even express kidnappings begin to be registered. But in Europe you kill. In countries like Sweden or England, where the kilo shoots up to 9,000 euros, there are murders resulting from trafficking in this narcotic substance. In Madrid, the gram costs five or six euros. In Dublin, 20.

The policemen appreciate a certain feeling of impunity among drug traffickers motivated, they say, by the lightness of the sentences. “Some are even less than two years old and do not even go to prison,” says the head of the Narcotics Section. Malaga anti-drug prosecutor Fernando Bentabol agrees. “The problem is that it is still not considered a hard drug, when it is, especially with the concentration levels of the active ingredient (THC) that we are detecting. We are having a beastly increase in cases of schizophrenia due to the consumption of marijuana, “explains Bentabol, who assures that the Attorney General’s Office for Drugs is compiling reports to present them to the Supreme Court and that cannabis sativa is considered a dangerous substance with serious damage to the health, “which would considerably increase penalties.”

“Brain Shredder”
The Malaga anti-drug prosecutor is concerned about the genetic manipulation of the seeds. “Before, marijuana had THC concentrations of 4, 6, or 9%. Now we are finding demolishing percentages of 20 or 30%. That is a shredder for the brain », denounces Fernando Bentabol. And this is because some drug trafficking organizations, driven by the demand for varieties that place more, cross different seeds to produce marijuana with a higher concentration of THC and enhance the psychotropic effect of the herb without caring about the health dangers.

The UN Office on Crime and Drugs indicates in its reports that marijuana must have “at least” 3% cannabidol (CBD) and not more than 9% tetrahydrocannabinol (THC). This is explained by Claudio Vidal, who is responsible in Andalusia for the Energy Control project of the Welfare and Development Association, and one of the greatest experts in drug research: “For a long time there has been a culture of growing marijuana and crossing varieties , but it is neglected that, together with THC, it is important that the other cannabinoid (CBD) exists, which modulates the effects of the former. If they are unbalanced, the health risk increases considerably ». Hence, the UN office warns that “at least” there must be 3% CBD. Vidal also stresses that there is a group of the population for which the consumption of cannabis sativa represents the greatest danger: minors and people vulnerable to psychotic disorders.

The Andalusian manager of the Energy Control project ensures that, for four or five years, marijuana use has already exceeded that of hashish, according to surveys carried out among young people who frequent nightlife spaces. The UN data also point to this change in trend, at least in Europe, where hashish trafficking “decreased by more than 30%” in 2015 and 2016 (the last years of the report), which seems to reflect “an abandonment consumption of cannabis resin in favor of the use of cannabis herb grown in Europe. ”